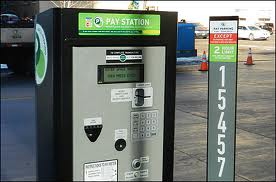 Sometimes I go to the Amsterdam Bar and Hall for a beer and fries on Friday's.  Today after I left this unique St Paul place, I noticed that people were trying to pay the meter collector on Wabasha St.  I know that parking is free in downtown after 5:00pm.  So I said it's free.  They said no, there is signage on the meter that says til 10:00pm, the public has to pay.


Lo and behold, there was new signage on the meters on the west side of Wabasha Street, for two blocks straight saying that.  My understanding is that the new rates were not going to take place til early January.  Between 6th and 5th streets there was no notice stating that the new rates do not start til January, 2016.  I saw a small yellow sheet serving as notice between 5th and 4th.  Very hard to see.

As I continued south (walking) on Wabasha, I heard a woman say "Do you have any quarters?' to a party with her.  I wonder if the parking meter collector took her quarters?  How much can the City make for the 2015 budget, with this kind of ploy?