Will Minnesota Cops do the Same?

The Obama Administration is interested in making it easier for the FBI to gain access to your e-mail and web surfing habits.  According to the Associated Press there may be legislation introduced to allow law enforcement officials on the national level do so.  But the catch is if the amendment as currently talked about passes it may allow local and state law enforcement that same easy access.  No court order, no subpoena, no search warrant will be needed.
Posted by Rich Neumeister at Friday, July 30, 2010 No comments:

Do you know what your landlord knows?

In today's St. Paul Pioneer Press there was an article on the front page entitled "Policing 101", by Mara Gottfried.  The article stated how Facebook is used as a communication tool between landlords and police.  My question is what goes on the Facebook page?  Is the information being shared on individuals or incidents that may happen at the various apartment locations?  Is the information accurate?  Is the person that may be discussed the right person?  What is the role of the police?  Do they give information to the landlords that may be considered confidential or private?

Technology has helped information get to people in various ways such as Facebook, but what are the consequences.  The set up as described in the paper needs to be discussed so that half truths, inaccurate information, and hunches do not follow individuals as they apply for housing.
Posted by Rich Neumeister at Wednesday, July 21, 2010 No comments:

Where oh where has the money gone?

Did you know that millions and millions of taxpayers money from state and local government are given to private groups and contractors for public functions?  Have you ever wondered, whether that contractor that provides the transportation or security service for the government is spending your money wisely?  Other than oversight from the government there is not much review.  That was changed about ten years ago when the Minnesota State Legislature thought it was in the public interest that when a "government entity enters into a contract with a private person to perform any of its functions" that entity comes under the Minnesota Government Data Practices Act.  What the law allows is for a person of the public to ask for pubic data "created, collected, received, stored, used, maintained, or disseminated by the private person in performing those functions."
Posted by Rich Neumeister at Monday, July 19, 2010 No comments:

DNC in Minneapolis 2012-When does the surveillance begin? 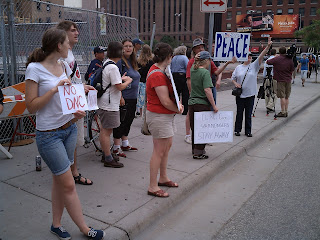 Today about 15 or so citizens made it known that they were not in favor of having the 2012 Democratic National Convention in Minneapolis.  They gathered at 5th and Hennepin and marched their way to Target Field.  They handed out a flyer with a number of reasons they opposed the convention, including the "militarization of local police" to the disruption of lives and local businesses.

It will be not known for some time if Minneapolis will host the convention, but the surveillance is already beginning. Bolted on a light standard over the area where the people gathered for the march, there was one of the sophisticated cameras used by Minneapolis police. It was recording the gathering.
Is the recording public or not? By law and Minneapolis policy it is public unless there is a on going criminal investigation. Maybe I will ask to inspect the recording for Sunday, July 18, 2010 at the corner of 5th and Hennepin, southwest corner, 11:30am to 12;30pm. Whether or not they give it to me may be a key indication of whether or not the surveillance for the DNC has already begun.
Posted by Rich Neumeister at Sunday, July 18, 2010 No comments:

Minnesota Govs. and Their Secrets

When the new Governor takes office in January 2011, he or she will have to decide as one of their first decisions is to whether or not to be an open, accountable, and transparent policy office or a secret, closed, and accountable one.  Over the last decade many documents, notes, and memos that detail how decisions are made on state policy from the Governor's office have become electronic.  Those electronic documents that are so essential for citizens to see who has influenced decisions, what factors were considered and to make sure things are on the up and up can easily disappear forever by a delete button or a short time frame to keep them..

There have been issues with Governor Pawlenty about electronic records pursuant to a story by the Star Tribune, Sunday July 6, 2008 and I contend continues through today.  Mr. Pawlenty's perspective is that he is only following an old court decision from several decades ago.

Where do the current candidates for Governor stand on this issue?
Posted by Rich Neumeister at Saturday, July 17, 2010 No comments: